On which stock exchanges is HUTCHMED quoted?

HUTCHMED is listed on The Stock Exchange of Hong Kong Limited (“HKEX”) under the stock code “13” and on the Nasdaq Global Select Market (“Nasdaq”) under the ticker symbol “HCM”. It is also admitted to trading on the AIM market operated by the London Stock Exchange (“AIM”) under “HCM”.

See below “What is the conversion process between HKEX, Nasdaq and AIM?” for details of the procedure for changing shares between the three exchanges.

The Stock Exchange of Hong Kong Limited, also known as HKEX, is the Hong Kong stock exchange. Additional information is available at www.hkexnews.hk.

The Nasdaq Stock Market, also known as simply Nasdaq, is an American stock exchange. It is the second-largest stock exchange by market capitalization in the world, after the New York Stock Exchange. Additional information is available at www.nasdaq.com.

AIM is the London Stock Exchange's international market for growth companies and it is the most successful growth market in the world. Additional information is available at www.londonstockexchange.com.

What are CREST and DIs?

CREST is a paperless settlement procedure enabling securities to be evidenced other than by a certificate and transferred other than by a written instrument, so that trades can settle electronically. Securities issued by non-U.K. companies, such as the ordinary shares of HUTCHMED, cannot be directly held or transferred under the CREST system, which is why DIs are required.

A DI is a facility created to enable HUTCHMED’s ordinary shares to be delivered, held and settled under the CREST system. Each DI will be treated as one ordinary share for the purposes of determining, for example, entitlement to dividends, voting rights, participation in pre-emptive follow-on offerings and returns of capital. DIs are a common feature of the AIM market and are used by many non-U.K. AIM companies.

What form does the U.S. listing take?

What is an ADS?

What are HUTCHMED’s CUSIP and ISIN numbers?

What does a depositary do?

A depositary is an entity which facilitates cross-border trading of an issuer’s shares. Among other things, depositaries provide ADS and DI issuance and cancellation services, and associated share transfer services such as maintaining the register of ADS or DI holders, distributing dividends to ADS and DI holders, providing annual meeting services and executing corporate actions. So, in practice, Deutsche Bank and Computershare, as the depositaries, maintain records of the holders of ADSs and DIs, respectively, and manage the flow of shares between the two separate markets, essentially converting DIs into ADSs when there is demand in the U.S., and converting ADSs back into DIs when there is demand for the DIs in the U.K. This service facilitates liquidity between the two markets with the objective that any price differential between the two markets is kept to a minimum.

How does the purchase and sale of ordinary shares, ADSs and DIs work in practice?

You can buy ordinary shares, ADSs or DIs through a broker, just as you would any other Hong Kong, U.S. or U.K. security. When you instruct your broker to buy HUTCHMED’s ordinary shares on your behalf, your broker will have the option of buying ordinary shares on HKEX, ADSs on Nasdaq or DIs on AIM. Conversely, when you wish to sell your position, your broker will either sell them on HKEX, Nasdaq or AIM. Any necessary conversion of securities would first be effected in the manner described below. In any event, this would be a seamless process for shareholders. Unless shareholders particularly wish to give specific instructions in that regard (in which case they are free to do so), they will not need to be concerned with which market their shares are purchased from or sold into. Brokers will simply buy or sell in the market where there is the most liquidity at that time.

Yes, it is permissible for holders of ordinary shares, ADSs or DIs to purchase HUTCHMED’s other securities (for example, an ADS holder may purchase DIs and/or ordinary shares through its broker) or to convert some or all of their HUTCHMED securities from ordinary shares, DIs or ADSs into one of its other listed securities.  The conversion process is described in further detail below. We would advise that shareholders seek advice from their broker and/or tax adviser.

What is the conversion process between HKEX, Nasdaq and AIM? 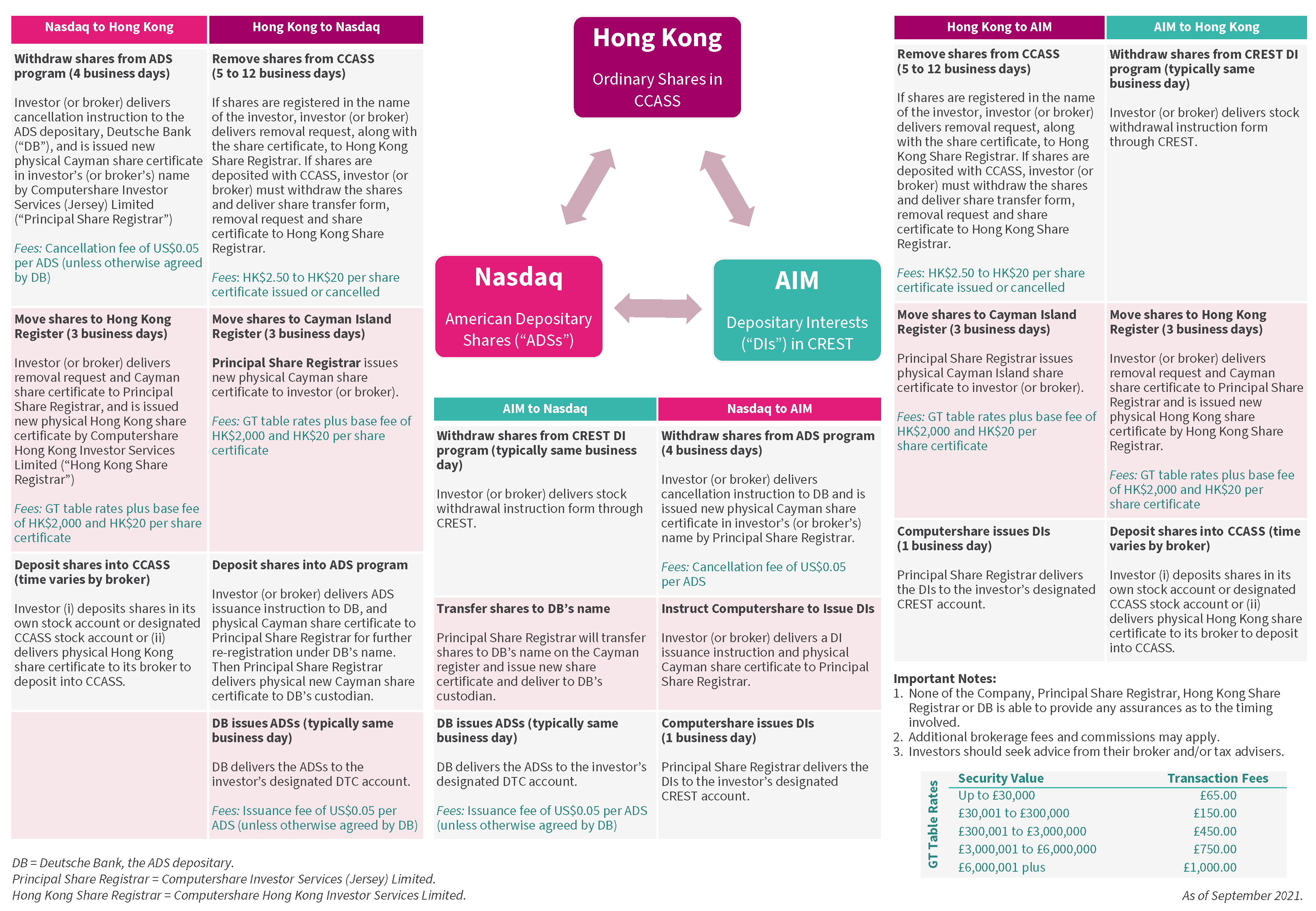 Are holders of ADRs/DIs entitled to vote at HUTCHMED’s annual general meeting?

Holders of ADSs/DIs may authorize HUTCHMED’s applicable depositary, Deutsche Bank or Computershare, to act as a proxy in exercising voting rights in accordance with the ADS/DI holder's directions according to the number of ordinary shares represented by their respective ADSs/DIs.

How can I keep up to date with latest developments at HUTCHMED?

You can send an email to investor relations requesting to be notified of any new updates announced here.

How do I obtain a copy of HUTCHMED’s annual report?

HUTCHMED’s annual report, interim report and other press releases can be downloaded from HUTCHMED’s website.

When is HUTCHMED’s financial year end?